So I have this student, formerly named Wayne. Wayne apparently really likes Ichiro Suzuki. And he actually has a print out picture of him in his bag and sometimes during class, he will take out the picture and show it randomly. (Just for reference, Wayne is in the fifth grade.) Once, I called him Ichiro as a joke, and he immediately changed his name on all his books, and his classmates have now adjusted to calling him Ichiro.

I just consider it his nickname, since Ichiro He isn't probably the best English name ever.

Speaking of odd English names, my boss has been trying to open a lot of classes recently, so we've gotten a lot of people coming to the school who have never studied English before, and there have been some odd names. For example, two sisters named Liny and Tini. We're going to suggest Lindsey and possibly Tessa. Although if anyone else has suggestions for a different name for Tini, I'm open. Anyway, there's some kid who's signed up for the demo teaching I'm doing on Saturday named Neo, and there's another kid signed up named Barbie.
Posted by lovelesscynic at 6:12 PM No comments:

and its slightly odd rock formations. 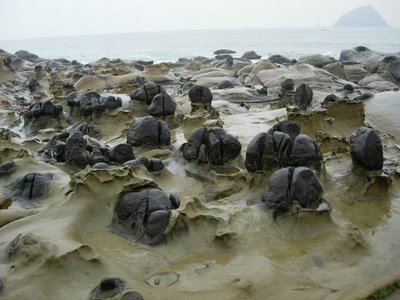 Posted by lovelesscynic at 5:57 PM No comments:

There are pictures of Toroko Gorge

i swear, I just haven't uploaded them yet. And also I have a lot more of these pictures to "get through" before I do the rest of them. 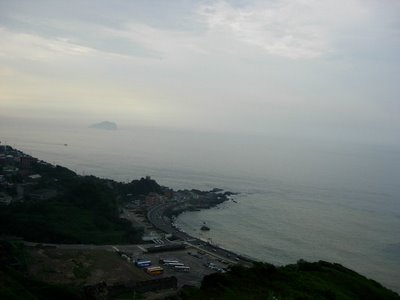 Posted by lovelesscynic at 5:54 PM No comments:

Another part of the mine 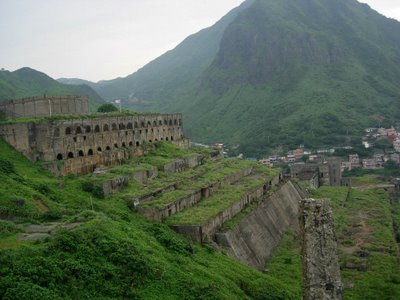 Posted by lovelesscynic at 5:49 PM No comments: 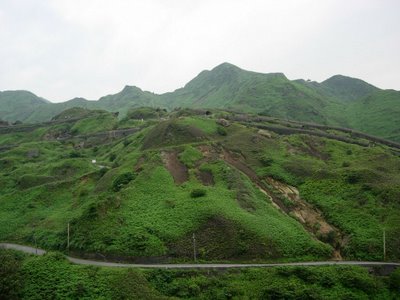 Posted by lovelesscynic at 5:48 PM No comments:

The town on the other side of Jinguashi 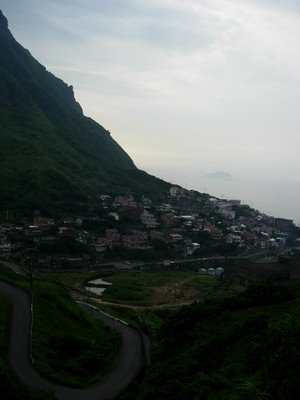 steam tunnels in Jinguashi. They're everywhere. 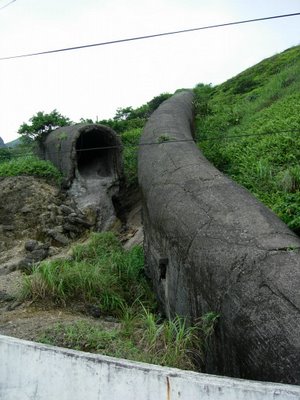 Posted by lovelesscynic at 8:31 PM No comments: 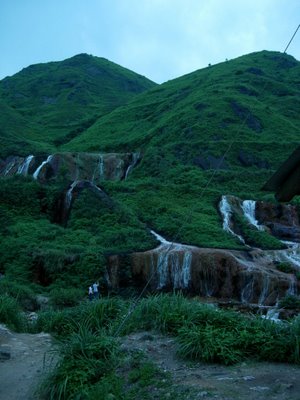 Posted by lovelesscynic at 8:22 PM No comments:

Another picture from the creepy park

Why is this park so creepy to people? 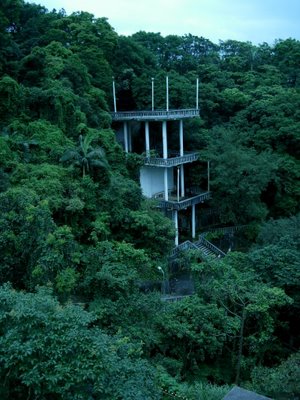 A park near my house 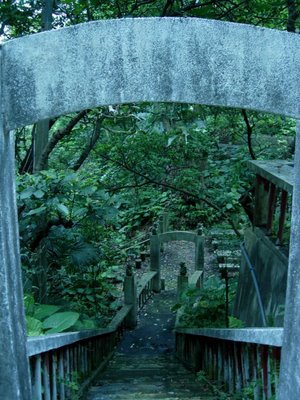 Posted by lovelesscynic at 4:56 AM 2 comments:

It's Hongdan Shan, near my house. 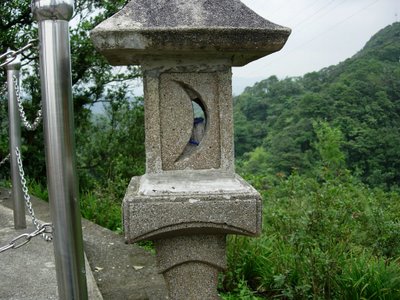 Posted by lovelesscynic at 3:40 AM No comments:

I don't want to eat. I swear to God I haven't eaten hardly anything in the last two days, it's so hot. Anyway, I also attribute the not eating and sleeping badly to stress. I'm studying for the GRE which I'll take in a couple weeks, plus other stuff. Anyway, I have now been in Taiwan for more than a year. It's kind of exciting and also kind of just like normal.

Anyway, I just got back from Toroko Gorge. Never have I been to a place where the scenery was so spectacular but where the food sucked so bad. Truly though, that place is amazing. It looks just like a Song dynasty painting for those of you who are Chinese nerds. Most of the time AdriAnne and I just would stop for a minute and just say "Oh my God! It looks just like a painting!" Seriously though, the gorge itself is made out of marble and so in the river there will be these giant chunks of marble roughly the size of a pickup truck which are made out of marble. Somehow this impressed me rather deeply.
Posted by lovelesscynic at 3:29 AM 2 comments:

So I finally got off my lazy ass and signed up for a video rental membership. After doing this I then rented three movies with AdriAnne. We watched two of them. Final Fantasy 7: Advent Children, which is a Japanese anime, and then Perhaps Love 如果愛 starring Takeshi Kaneshiro and Zhou Xun, and also Jackie Cheung aka Zhang Xueyou.

I was actually pleasantly surprised by both movies. I actually saw the American animated Final Fantasy movie (so sue me.) and disliked it a lot. It was essentially just a stupid action movie, they just didn't have real people so it might have been more expensive than a stupid action movie. Final Fantasy 7: Advent Children actually got the animated movie part right. I mean, if you're going to have animated characters it makes sense that you might want them to do stuff that other people can't actually do. Like run up buildings, or jump eight feet in the air and land on someone else's motorcycle and hack at each other with swords twice their size. It was fun, and the hair was very pretty.

We also rented the Korean horror movie, A Tale of Two Sisters. I've seen it before. And now I'm almost kind of sort of sure that I maybe know what the hell went on in that movie.
Posted by lovelesscynic at 7:14 PM No comments:

There's a hiking trail literally right behind my house. 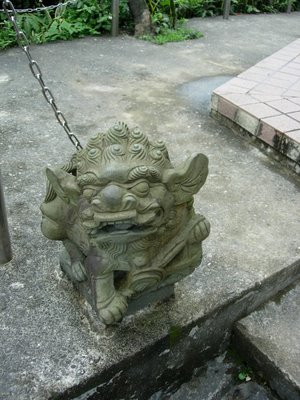 Posted by lovelesscynic at 7:09 PM No comments: 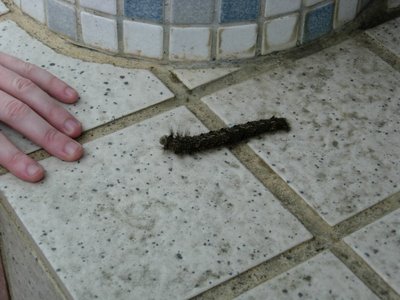 I'm just really busy. My classmate AdriAnne has been visiting me, which has been fun, but it's actually meant that I'm not able to blog all that much. However, I'm going to go to Toroko Gorge with her for a couple days. My first vacation in Taiwan not on a national holiday and afterwards oh , there will be pictures.
Posted by lovelesscynic at 5:27 PM 2 comments:

If I don't laugh

I will cry.
Here's a link to some sort of Grant Morrison "Chinese" superteam. I can't believe this. I thought this was a joke. Unfortunately I was wrong. How in any way could anyone think that this was a good idea.
Posted by lovelesscynic at 8:59 AM 4 comments:

So, there's this film out, Cavite that seems to be getting a lot of press right now. It's even on metacritic.com. While looking at some of the future releases, (because I have no life) I also saw that Michael Kang's film The Motel is getting released in a couple weeks I think. It was weird to see two Asian American films getting so much attention within such a short time.

I was thinking about the state of Asian American film. It's sort of a weighty topic and sort of a boring one perhaps, but what the hell, I'm going to talk about it anyway. A couple years ago, Better Luck Tomorrow made huge waves by being an Asian American film which was not about rebellious second generation children and their mothers, for being commercial successful and finally, and most surprisingly for being a good film. As luck would have it, around the same time Charlotte Sometimes another Asian American film also did really well. It occurred to me at the time that something was going on.

Since then I've seen a bunch of films come and go, usually trying to capitalize on Better Luck Tomorrow's grassroots success. (i.e. getting on a bunch of e-mail lists and telling Asians to go see the movie and to tell their friends to go see the movie, and we all know how much we looove the internet. Not to mention Friendster, xanga, and the facebook.) There have been a bunch of them that seem to have won distribution and gone on to be modest successes sometimes critical, sometimes commercial, sometimes both. The ones that come to mind are Robot Stories, Saving Face, Harold and Kumar Go to White Castle, ( I include the last one because, although it was written and directed by two white guys, it starred two Asian guys and used similar methods of trying to get people to go see the movie). I think for the first time in history, we actually have something that we can call Asian American cinema. Most of these films do the Asian American film circuit, and later break into the more mainstream circuit, like Sundance and other places.

I think after Better Luck Tomorrow there was a lot of pessimism about whether or not this trend of success would continue or whether it was just a fluke. After all, before Justin Lin there was Wayne Wang. And quite frankly by taking on Fast and Furious: Tokyo Drift, Justin Lin does seem to be going down the Wayne Wang sellout road. I have hope though. There do seem to be some projects out there that are getting some attention like Cavite, The Motel, The Grace Lee Project, The Namesake, Americanese, and Punching at the Sun. I'm curious to see what happens.

The point of this long ramble is that, I do think something has happened. It seems to be easier for Asian American filmmakers to break into the regular indie market and get people to watch their movies. Most of these directors are first timers so it will be interesting to see what happens to them. Whether they start making like Wayne Wang and making essentially whitewashed movies or they continue making Asian American films. Eric Byler is a more hopeful example of this. And even Justin Lin's films have never been as whitewashed as Wayne Wang's. Take for example Anywhere but here which takes place in what is apparently an alternate dimension where all people of color have left Los Angeles. At least Annapolis had Roger Fan in it, even if it reportedly sucked.

My people may not be good rappers. (Sorry Jin.) But they do seem to be capable of making good independent films and good comic books. And for the time being, that's good enough for me.
Posted by lovelesscynic at 2:19 AM No comments: