So I took the GRE yesterday, in Taipei. It was surprisingly easy, except the part where I had to get there by 8:30 in the morning, requiring me to be on the bus at 7:15 or so. It was kind of an interesting feeling, I really haven't done a standardized test in a while, so being surrounded by about 500 people who are really nervous, just like you, was kind of a nostalgic feeling. The test confirmed for me that I suck royally at math, I had forgotten pretty much all of the equations I ever learned, but since it's really not all that important for my field of study, I didn't really care. I had about an hour of being bored and then an hour of stress, bored=math stress=verbal. Incidentally there was one guy who was clearly drunk when he was taking the test. I guess he was either really confident or really dumb. I'm not really sure which.

Also, an interesting aside. I only realized at 10 pm the night before the test, that I had no pencils. Or at least no mechanical pencils. So I ran around like an idiot for an hour the night before the test looking for pencils. Apparently they sell pencils specifically designed for computer test taking in 7-11. Truly this is a wonderful country.
Posted by lovelesscynic at 5:38 PM 1 comment:

So thanks once again to angryasianman.com I took a look at this series of articles in the San Francisco Chronicle, about human trafficking in San Francisco. They tell the story of one woman who was forced into prostitution. Originally, I was curious since angryasianman mentioned it seemed rather exploitative, although it did address an important issue. After reading the article for myself, I didn't have a very high opinion of the article. First of all the accompanying pictures, I could go on about forever. They feature an Asian woman, in poses where she's looking away from the camera, making herself subject to the camera's gaze. And it also doesn't look like she's wearing clothes, which sort of eroticizes the whole story in a really weird, and kind of creepy way. I mean, addressing the issue of human trafficking is great, and giving someone a chance to relate their experiences is great, but I don't really think continuing to exploit their body, by including pictures like that is particularly ethical.

Also the title itself, "The Diary of a Sex Slave" a diary it certainly ain't. It's a series of three articles, not written from her point of view, or even featuring many direct quotes from the woman herself. And it once again gives a sense of confidentiality and intimacy that once again seems rather misleading and exploitative.
Furthermore, the article itself frequently eroticizes its subject, describing "her black hair that fell like silk to her shoulders" (I'm paraphrasing, but that's more or less what it says) which is not only rather unneccessary, but further smacks of Orientalism, and emphasizes her "small frame" in relation to her customers. Once again, it seems sort of needlessly exploitative. I mean, it's the whole point of the article that she's not a sex toy but a human being? That's why they're telling her story right? Also their description of Korea seems a little one-sided, and according to my knowledge of Korea, which is pretty basic, not very accurate.

"Today, sex work accounts for 4 percent of the country's gross domestic product, according to government reports. Prostitution brings $21 billion a year -- more than electricity and gas combined. There are an estimated 330,000 sex workers, 80,000 brothels and 69 red-light districts in a country the size of Indiana. " (I'm really quoting here.) The tone seems a little overly judgemental of Korea. I mean, it's not like Korea has a monopoly on a high concentration of sex workers in a small country.

Another thing that bothers me is who the reporters, who, from their names anyway, seem to be two white women, or at least two non-Korean women, say they get their information. "May and Fitzmaurice reported from the red-light districts of Seoul and Busan, where women are on display in glass rooms. There, they spoke with Korean military police on patrol, and "fishers," elderly women who beckon customers into the rooms. They interviewed U.S. soldiers in sex clubs near the demilitarized zone, and spoke with the "juicy girls" inside who are hired to entice men to buy them $20 drinks and pay for sex." I mean, if in fact they are two white reporters, how did they communicate with these people. Or talk to them about such personal and sensitive issues?

Anyway, I just had some problems with the article.

Furthermore, there was a response by some people in the Korean American community. What's interesting, is that they try to distance themselves from the article. Asserting the respectability of the Korean community, and quite interestingly, characterizing this in terms of class and wealth. "The exaggerated headlines and lurid photos that dominated the front page of The Chronicle for four consecutive days gave disproportionate emphasis to a small immigrant segment of the overall Korean-American population in San Francisco and California, the vast majority of whom are well-educated professionals and hardworking families. " So we complain about the model minority stereotype, but we fall back on it when it's convenient for us? They do raise some good points though, which is that they do attempt to exploit the subject, and the picture that they paint of Korean society is rather inaccurate.

Normally I really like the San Francisco Chronicle, but these articles don't really live up to the journalistic standards I expect from them.
Posted by lovelesscynic at 6:14 PM 3 comments:

On a totally random note, something that makes me happy is that 7-11 now sells a green milk tea. To clarify, this is green tea with milk in it, and not green milk with some tea of an unspecified color.
Posted by lovelesscynic at 9:03 AM 2 comments:

My Students love me THIS much 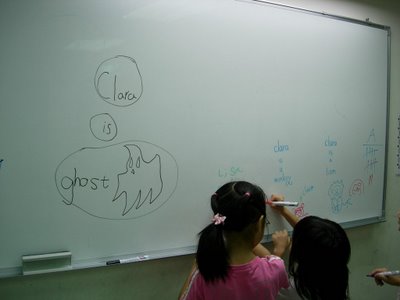 Posted by lovelesscynic at 8:46 PM No comments:

One of my students, Heidi, comes up to me often and pats my butt and says "My hips!" I'm not really sure where she's getting this. Definitely not from me.

Learning how to make frozen steamed buns without a microwave or an oven. Just some water and a pan. My cooking reaches new heights.

One of my students Evan has completely mastered how to imitate my voice saying "Sit down now!"

The Decemberists' new CD The Crane Wife. Very very cool, and new! Just when I think that all the bands I like have started to suck, I get some evidence to the contrary.
Posted by lovelesscynic at 8:34 PM 3 comments: