So yesterday, on my way to meet my friend on Capitol Hill, I took the bus. We were supposed to meet around 8:30 at night. Which is generally a bit later than I go out. Yes, yes, I know, I'm lame.

The bus driver attempted them to stop. And finally had to throw off the man with the dog. Who apparently followed and screamed at the bus as it left.

The moral of the story is: don't bring your pets on the bus. It will just cause more trouble than it's worth. Or, Don't be an asshole!
Posted by lovelesscynic at 7:33 PM 1 comment:

a music video that is not by The Flowers. Instead it's Asobi Seksu- Thursday.

Posted by lovelesscynic at 7:26 PM No comments:

Sometimes it really seems like the more time I have the less time I actually make use of. If I'm really busy, for some reason, I'm able to get a lot more work/studying/whatever productive done. When I have large chunks or days of time, I spend a lot of time 發呆 (I'm not sure what the best translation of this would be, staring in to space, doing nothing?) rather than doing anything productive.

Hahaha, behold my messing about on the Chinese version of Youtube. Even more Flowers videos I haven't seen. Look upon my works and despair!

Anyway, the more I watch, such as this early early video

the weirder it seems that these guys are apparently Olympic spokespeople. Their attitude really doesn't scream "sportsmanship"

I realize that this must get kind of tiresome. But honestly, if you're still reading this blog you must be used to my bizarre obsessions by now.
Posted by lovelesscynic at 8:43 PM 2 comments:

A review of Pan's Labyrinth

About a year after it was relevant. And therefore with lots of spoilers. If you don't want to know the end, don't read it.

Oh how I wish I could go back in time and not watch this movie. I have often observed to friends and acquaintances, that there's nothing worse than a movie that wastes a good idea. Which is pretty much what Pan's Labyrinth was.

It wasn't a terrible movie, but it certainly didn't live up to the hype. First of all, the main character is set up early on as having pretty much spent all her time reading fairy tales. Yet when she is dropped into one, she does such unforgivably stupid things, I wanted to strangle her.

She has to go to some underground world to retrieve a key. She's warned not to eat anything. Yet despite multiple murals of this mysterious sleeping eyeless man mutilating and eating children, and a giant frickin heap of frickin childrens' shoes in the corner, she still eats two grapes, and gets two of her helper fairies killed in the process.

Then when the faun (understandably) gets angry, she says she didn't think "two grapes would make a difference." Anyone who has read any fairy tales has to know that two grapes make all the difference. Hell, just read a Greek myth or two.

The final straw was really when she goes back for her little brother. The faun gives her this magical chalk that will cause her to be able to draw a door to wherever she has to get to. So she enters her evil, facist, torturing stepfather's lair. Where he's keeping her baby brother. And as she's hiding from her stepdad, she somehow manages to leave the magic chalk ON THE TABLE. Which of course the evil stepdad sees, and hilarity ensues.

Really, she was doing such stupid things, I was actually glad when he shot her. I'm generally quite a grumpy person, but I generally do not root for facist soldiers over cute Spanish child actors. But this was really a relief because it meant she would shut up and stop doing stupid stuff.

So in short, Pan's Labyrinth=disappointment.
Posted by lovelesscynic at 10:24 PM 7 comments:

View from the bridge 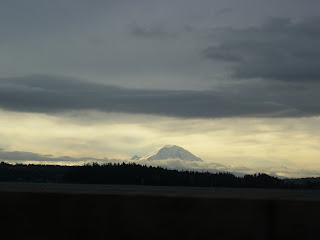 Posted by lovelesscynic at 5:52 PM No comments:

On Thursday, I spent 5 hours stapling and unstapling money. We (i.e. I) did new student registration, and ended up with $800 or so in student fees. Have I ever mentioned that my math sucks? It sucks. I should never be placed in charge of money ever. The first time I counted it, I was 6 dollars over. The next time I counted it I was $80 short. After much panicking and flapping I discovered that roughly 80 had fallen out of the envelope and into the drawer. I recounted, resorted (all receipts have to be matched with the exact amount of cash) and now I'm $7 and I can't figure out where it came from. At least I'm not short.

Also, I had to go to the post office last week to mail some things, and one of the ladies in the post office had a black eye. She doesn't look like the type to get in bar fights in her free time, so it looks like someone just cracked her one. I hate people sometimes.
Posted by lovelesscynic at 5:43 PM No comments:

Life Sucks Nirvana. I no longer care about anything. I'm just going to smile and listen to music. Because I'm at my limit and I just don't care anymore.
Posted by lovelesscynic at 8:24 PM 1 comment:

Making up for lost time

This video is probably funniest if you've watched as much Mandarin pop as I have. Since it makes fun of some of the common tropes of the "love" music videos. However, it's equally amusing to watch Da Zhangwei, the lead singer, attempt to look soulful and fail miserably. (The narrowing of his eyes equals depth!) He's way more fun when he's bouncing around acting like a 15 year old. I'm actually not sure if this video is even meant to be taken seriously, (Star Wars masks?), but even if it is, Asian MTV would be way funnier if there were more videos like this.
Posted by lovelesscynic at 9:29 AM No comments:

Too late for Thanksgiving but

this clearly and succinctly sums up my feelings about the Pilgrims.
Posted by lovelesscynic at 8:48 AM No comments: 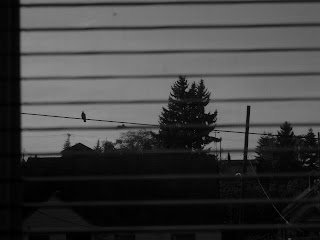 I'm honestly not sure why, but this bird looks hella emo.
Posted by lovelesscynic at 7:58 AM No comments:

in A Wild Sheep Chase where the narrator's girlfriend asks him to talk for five minutes. Apparently she gets every new person she meets to do this and then judges them completely opposite to how they portray themselves. I always found this do be a rather interesting idea. And most recently I've even put an amended rule of my own into practice, I now mostly judge people completely opposite to how they talk about themselves.

What do you all think?
Posted by lovelesscynic at 7:51 AM 4 comments:

I am sorely tempted

to go back in time and assassinate the person who first thought that techno remixes were a good idea. On occasion, they don't make a song worse, but in general, they very rarely make the song better.
Posted by lovelesscynic at 9:46 PM 1 comment: